It’s nearly summer, and already feeling like it, and yet I haven’t shared anything I’ve read since nearly Halloween. Get ready – it was a cold, snowy winter!

At the behest of friends I jumped in hoping to finish before seeing the movie. Turns out the movie was awful and I was told not to waste my time if I was enjoying the book.

If you’re not familiar – Enders Game is a sci-fi/war games book, with children fighting the war. Did you like Hunger Games or Harry Potter? Interested in any sci-fi movie or TV show? This will be familiar – parallels to Star Wars (and thus Harry Potter) throughout.

It was a quick read, pulling me in immediately, while not entirely understanding what the book was about. I had a hard time remembering just how young these children are when they are pulled from their families and sent to bases in the far reaches of space to train for battle. They are young – very young. Think Rue’s age – if you can handle that. 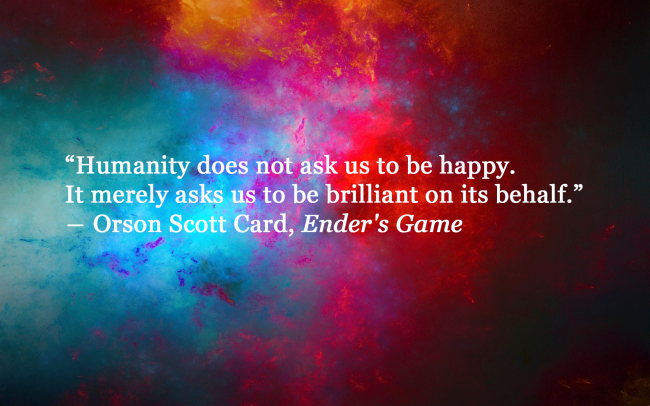 There is definitely a sense that this is taking place in the not so distant future – keeping in mind it was published nearly 30 years ago – it may make sense. But it also alludes to some disastrous war that had happened recently on Earth. Early in the book there is a little more background and details about what is happening on Earth, how governments and news function – which I found annoying at first, but once that tailed off you’re left with very little information about what is happening with Ender’s family. I kept wishing I could know more.

My understanding is that the movie butchered the book, including a different ending. I finished the book late one night last November, reading the nearly final lines, as I sat up right in bed and yelled out “WHAT?” Thrown for a loop at the very end – the best stories are able to do that.

This book was beautiful, inspiring, and wonderful. Again – I didn’t really know much about the plot. Just picked it up and started reading. You are along with Liesel on a journey. The perspective the book is written from was unusual and threw me off more than once. However, once you are fully wrapped up in the story, it matters less.

A little girl, illiterate, shy, and thrown into a new home in a new town outside Munich early into World War II. She doesn’t really understand yet what is happening in her country – just that it is the reason her family is not together. The book covers her new life, with her foster family, in her new school, and her growing love of books – even before she knows how to read.

I can’t recommend the book enough to anyone interested in history or has a love of books. Read it!

(Again, I was trying to read it before seeing the movie, and again, I still haven’t seen the movie.)

January 2014: Lady Catherine, the Early, and the Real Downton Abbey

This book covers the time frame that you would have seen in Downton Abby. The real family is quite interesting, though they faced many of the similar issues to keep the land and make it profitable, and keep the style of living. It also covers a large swath of history, and includes stories from dinner parties with the likes of Winston Churchill just before Britain declares war on Germany in 1939.

Elaborate weddings, shooting weekends, and visits with royal family make the story of the Highclere just as interesting (maybe more so) than Downton. Keep in mind it’s focused on British history, written by a Brit, so the detail on what is happening during World War II can seem immense – assuming you don’t love that the way I do.

I don’t even know where to begin with this. Especially with the more recent kidnapping of the girls in Nigeria, I can speak enough to the plight of the need for young girls to have access to education. Malala’s story is such a different world, and eye opening to those in the West – especially to those who may never have been exposed to what life in a place like Sway Valley. While still reading the book I couldn’t help but think this should be required reading in middle schools.

As different as her life is, she is still a young girl, doing homework, fighting with her friends, wondering about boys, playing with her hair. Somethings are the same everywhere. And yet, there were times she wasn’t allowed to go to school. Much of the time she was in school the community discouraged it. Slowly, with each school year, some of her friends didn’t return.

Culture and threats were too overpowering, and the need for a young woman to be educated as long as boys wasn’t clear. Beliefs continue that at some point a girl needs to learn to keep a home, and raise a family. Continued education isn’t a priority. While I wish everyone, and by everyone I do mean every person, should read this, I also recommend a recent New York Times article looking at Malala’s story, the girls in Nigeria, and why education of young women is so threatening to the Taliban. Check out What’s so scary about smart girls? (Hint: Its that education can change the world.)