A Walk in the Woods has been made into a movie. Robert Redford plays Bill Bryson. As a fan of Bill Bryson books, I’m pretty excited about this. His books are funny. Like inappropriately laugh out loud on the subway funny. So find it and read it now (and stay tuned for my post on it very soon)! From what I can see I already know where the movie has taken liberties, but I’m still down, mostly because, of all of Bill Bryson’s books – this is the one that makes the most sense as a movie. Movie is out September 2nd. (Please don’t blame me if this doesn’t work out. You know the book is better already.) 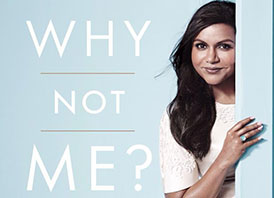 Mindy Kaling has another book coming out. And I will be reading it. Why Not Me? will be out September 15. Here’s a HuffPo piece on it from the spring, in case you missed it. I’ve preordered my copy. While you’re at it, if you haven’t read Is Everyone Hanging Out Without Me, pick that up too, cause you’re way behind.

Next up for me to read:

The View from the Garden City: American woman studies in Cairo, and learns far more from the Egyptian women she meets than from her studies. Found it at my mom’s house, and sounded interesting, a little different from what I’ve been reading.

Grow Your Value: The follow up book to Knowing Your Value from Mika Brzezinski. I’m a big fan of her’s, and Morning Joe. Her first book was great, and a must read for young women, especially those just entering the workforce. I need to read this before she’s in Chicago next month as part of the Know Your Value tour.

Mrs. Bennet Has Her Say: New novel for Austen lovers. This sounds like it’s the story of Mrs. Bennet before she became Mrs. Bennet, and just after.  I’m really not sure about this, but yes, I’ll probably read it. Will it make me like her more, or less? We’ll see.

I’ve taken on a few of the sequels to Pride and Prejudice written in recent years, and a couple have been fine. Likely none of them are what Jane Austen would have intended, but we really can’t help our thirst for more, can we? The best I’ve actually read are the three books by Pamela Aidan, that are really Darcy’s side of the story. Aidan delves way too deep in the politics of England during the Regency period, pulling Darcy into an odd world in the second book, but really it’s worth it for the first and third books.

The Visitors: I saw this in the bookstore this week. A girl is sent away from home to stay with her father, an American archaeologist, in Egypt during the hunt for King Tutankhamun’s tomb. While there she makes a friend and their lives become intertwined forever more, like any good novel does. I’ve wanted to go to Egypt since about fifth grade when I first learned about ancient Egypt. For the time being I’m doing so vicariously through novels and history.