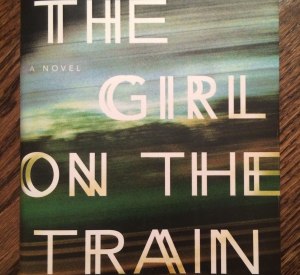 The Girl on the Train is many things. The book, the girl, the girl the girl sees, are all more than they appear.

As to the comparisons to Gone Girl – yes, it is similar. In certain ways: the narration is back and forth by chapter between, first two characters, and later three; there are unhappy couples; a mysterious disappearance; a mind-bending, emotional mystery; you may not like a single character. But you’re still going to read it.

Otherwise it really is a completely different story. Three women are tied together – the ties seem in some ways vague, and in other ways obvious. Two controlling men are in the center of the story. But not to worry. Once you think you have it figured out, everything will fall apart to come back together, making a whole new picture.

“Let’s be honest: women are still only really valued for two things – their looks and their role as mothers.”

All three women are going through a major emotional and psychological crisis. All three are lost. One in a cloud of addition, and missing memories; one in a past she can’t seem to escape, and a future she can’t quite see; one in a perfect life, with the walls closing in.

As I was reading the book I found a couple articles about why women are so interested in stories about their own destruction. Why are books like Gone Girl and Girl On the Train such big hits? These books are the only ways women consume these types of stories – TV shows and movies. Women are often the victims, brutally assaulted and murdered. The obvious tip in these cases in the husband or boyfriend. The vast majority of violent crimes against women are committed by someone she knows.

“I have lost control over everything, even the places in my head.”

Remember I said the book is mind-bending? I read this great piece on Hazlitt, that looked at violent crime stories, the pattern they follow – always along the lines of domestic violence, with the focus often on the perpetrator – with all the signs and tics, and not on the victim. This gets flipped in Girl On the Train. If you have read the book do you see where I’m going?

“There’s nothing so painful, so corrosive, as suspicion.”

It’s worth checking out this story, as well for the studies done by professors at the University of Illinois, looking at true crime stories. Once again – this is flipped from what is expected. While men are stereotyped to enjoy these, women are actually much more likely to consume them. The most fascinating part of the article:

Yes, we read them for self-preservation. Here’s the article.

It’s also worth noting, women are more likely to write true crime novels. In case you’re now interested in some similar options, check out this piece from Millions – the book suggestions include female detectives, rather than just female victims.