[I’d also like to offer a warning, especially if your usual reading material is pretty clean. These books are not that. They are graphic in the language soldiers use, and in how situations are described. But that is what makes them accurate to the story they are telling.] 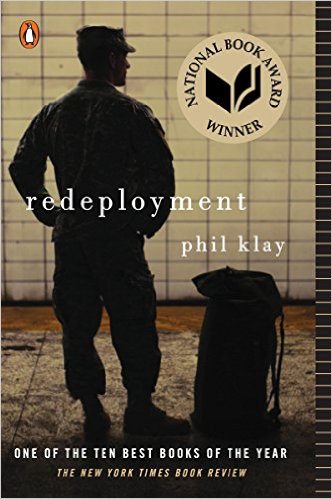 Redeployment looks at war and life after war from mostly the Marine perspective, but also from unique places that you wouldn’t normally hear from, including a Marine Chaplin and a foreign service officer. Kay gathered the stories from experience, and from other vets. The other resources he consulted in his research (listed in the acknowledgements at the end) show the great effort he went to be honest in his portrayal and story telling, and, I thought was interesting – to not take sides, or get political. He showed multiple sides with in his stories, and placed importance on the people as individuals, not a side in a political debate. Something I think many, including myself, often forget about. Especially when it can be so easy to forget we are still at war.

The stories are well written, so while often wrapped up by the end of each chapter, I found myself wondering what happened with different men. What came next, how’d they fair in the rest of their deployment, or in returning home. The welcome and frustrating sign of a well written character.

I’ve read other war books – Band of Brothers, Black Hawk Down, (does Heart of Darkness belong is such a list?). The books I read for a class on Vietnam in college have been blocked from memory because they were so horrifying. I get it  – that was the point. If you haven’t read a book that digs into a soldiers experiences during war or after, it’s time. Redeployment hits home in a unique way too – most books about soldiers in war, fiction or non, come after the war. We are still in this one, and there are still people fighting and vets coming home, which makes even more important to read over another option right now.

Remember when I said beware of best sellers? Well, another tip this is a good one: always trust a National Book Award winner.